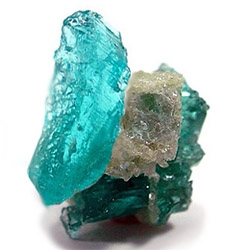 The stone of tourmaline can be expensive, can have affordable price and sometimes valued by a huge amount of money. The tourmaline acquired its properties of price plasticity just recently. In the past, it was mined in small quantities transported from afar, sold exclusively to grand seigneurs, and therefore was highly appreciated.

Not even every monarch could afford himself to buy a tourmaline of high quality. That's why the King of Sweden Gustav III sent proudly and the Russian Empress Catherine II accepted with a sense of dignity his gift in the form of large red tourmaline.

Tourmaline is a many-sided mineral. The first gems of this group, which were brought to Europe, pleased by its softness of red shades. The discovery of rich deposits allowed tourmaline to become a natural champion in color availability among precious stones.

Sufficient hardness, good polishing properties, glossy surface glow, and blurred glow of the inner space of the crystal earned him the well-deserved glory among jewelers, collectors, common connoisseurs of beauty.

Physical and Chemical Properties of Tourmaline

History and modernity of polychromatic tourmaline


This stone has long been known to man. Back in ΧΙΙ century Byzantine craftsmen already set tourmaline in gold. The Russian masters gradually adopted the skills of masters of Second Rome. By the XVI century, they found their own deposits of gems, opened the way to India and began to supply customers with rare gems independently.

The Enlightened Europe was the last one, who discovers tourmaline. The Dutch sailors brought unusual crystals of lilac color from the overseas colonies; The natives called them "Turemali." Its rounded edges of a translucent bar of the triangular section fascinated handy jewelers of Nothern Europe. The new gem was highly appreciated by both the masters and customers.

Since then, the popularity and cost of tourmaline have been growing and growing. The most expensive among them are mined in Brazil, the state of Paraíba. Tourmaline Paraíba is a gem that characterized by a deep neon glow of cold tones. The variation of color is from light blue through saturated blue to turquoise, greenish, emerald-green. Paraíba is the champion in brightness. Lovers of tourmaline convinced that there is no more attractive gem in nature. 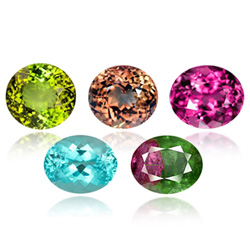 The same words are said by the fans of the red Tourmaline. For similarities with rubies, Red Tourmalines got the name Rubellites. Until recently, the red tourmalines (for many decades, by the way) held the priority on the demand.

And even today they do not lose their charm. Shades of fresh raspberries, which you can find in rubellites of the highest quality, have the greatest value. Besides in Russia, rubellites are also mined in California, Madagascar, and Sri Lanka.

In Urals and Siberia is mined the sibirite - the tourmaline of dense cherry color. First discovered three hundred years ago, sibirite caught the hearts of jewelers with the warmth of its unusual color. The intensively painted forms of gem with the predominance of lavender-red and red-purple colors are especially fascinating.

Achroite is a tourmaline completely without color. The stone is rather expensive (as it extremely rare, founded only in Elba Island near the Italian Tuscany). However, it's have little decorative value. Nevertheless, the skillful cut of the jeweler transforms the crystals of Achroite into expensive jewelry inserts.


The Elbe Island is rich not only with achroites, but also with tourmaline of beautiful two-tone color. The mineral, which combines green and pink colors, got the name of Elbaite. 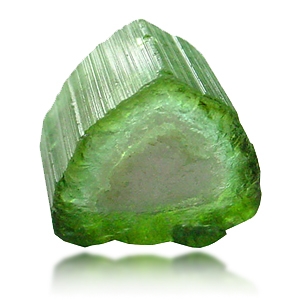 The Verdelite, or Brazilian emerald, is the most common variety of tourmaline. It is ubiquitous, but the colors of crystals are diversified even in the territorial boundaries of the same deposit.

As the twins chrome tourmaline and emerald are similar in color. The green tone of its color is adorable, and only more calm game of the light (a relatively small refractive coefficient and a restrained glow of polished surfaces-natural properties of the tourmaline) distinguishes its crystals from the Colombian emeralds.

Another green tourmaline, hameleonit, is not claiming to have the daintiness of olive-green tone. However, like alexandrite, it has a quality to shift color under the light changes. Green at the afternoon, hameleonit become red-brown in the evening light.

Indicolite is a rare tourmaline from South America or Ceylon painted in deep blue shades. Special exemplars of indicolite are famous for its maximum density of tones.

Under lack of light the stones look black, but under direct light, they give splashes of blue inner glow. A real black (or close to black) tourmaline have a name of Schorl, and is rarely used in jewellery. 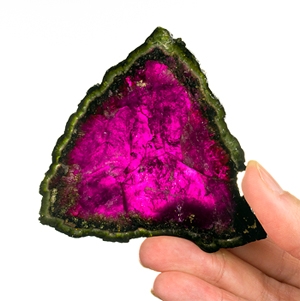 Dravitt is a tourmaline of warm yellow-brown colors. The mineral got its name by the Austrian river Drava, where it was firt found. It mined mainly in Kenya.

The beads and cabochons of the watermelon tourmaline compete in color contrasts with the opal. Milky white background, red clots and green layers together create an exceptional expressive effect.

Here we describe only the most high-demand kinds of minerals for jewelers. You can meet several dozen species of tourmaline in private and museum collections. But in most cases they are not suitable for jewelry work.


The unique physical features of the mineral allow using it as an air ionizer. The therapeutic properties of the tourmaline are confirmed by the fact of using them in various medical devices. The stone of tourmaline is also effective in psychotherapeutic practice.

Very often tourmalines are used in non-traditional medicine art. The pink tourmalines have a beneficial effect on people who have disharmony in their personal lives. The Red Tourmalines strengthen the creative potential of artists and writers. The green stone reduces the intensity of the individual's negative emotions, preventing destructive forces from affecting the mind. The healing properties of the tourmaline are amplified by its supernatural activity. 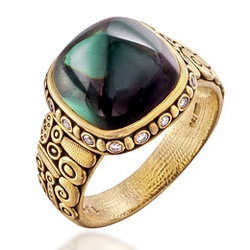 The most powerful magical properties of tourmaline are inherent in black crystals, set in high karat gold. Such a stone would open in its owner the gift of foresight. But you should be very careful in using the "services" of the tourmaline as a forecaster of the future. The black mineral is in constant contact with the world of the Dark forces, which is not safe for man.

Colored tourmalines are varied by its efficiency and nature of the benefits according to intensity and color tone. Wearing colored jewelry from tourmaline helps the individual to achieve the true grandeur of the spirit. The stone is particularly effective for such astrological signs as Leo, Scorpio, Sagittarius and Capricorn.

Tourmaline patronizes the people who were born under signs of the Scorpio, Leo, Capricorn and the Sagittarius.